I found two ALGOL sniplets for the forfeit game contest. My ALGOL 60 programming book (happy birthday for the ALGOL programming language) offer for every problem the question, a problem analysis, a code structure chart, the code solution and the executing time for the ZUSE 23 computer (see a very similar Z22 on wikipedia). I converted the fast solution for the game of forfeit from ALGOL to javascript without optimizations and benchmarked it.

The 1:1 conversion of the ALGOL code runs on my Intel Atom N270 3.5 million times faster than on the original ZUSE Z23.

get ALGOL working on your box

How can I start ALGOL code on my local ubuntu? And not the more popular ALGOL 68? There is only one working interpreter: the NASE A60 interpreter from Erik Schoenfelder. Extract the archive, run

and start your algol code directly.

More background to the z23 on egge.net:

This solution from H.Lehr was the fastest solution. Its not working for all number ranges and there is no defined break. It needs 6 minuts and 17 seconds for calculating and printing on the original hardware. If you are not familiar with ALGOL 60 some tips: 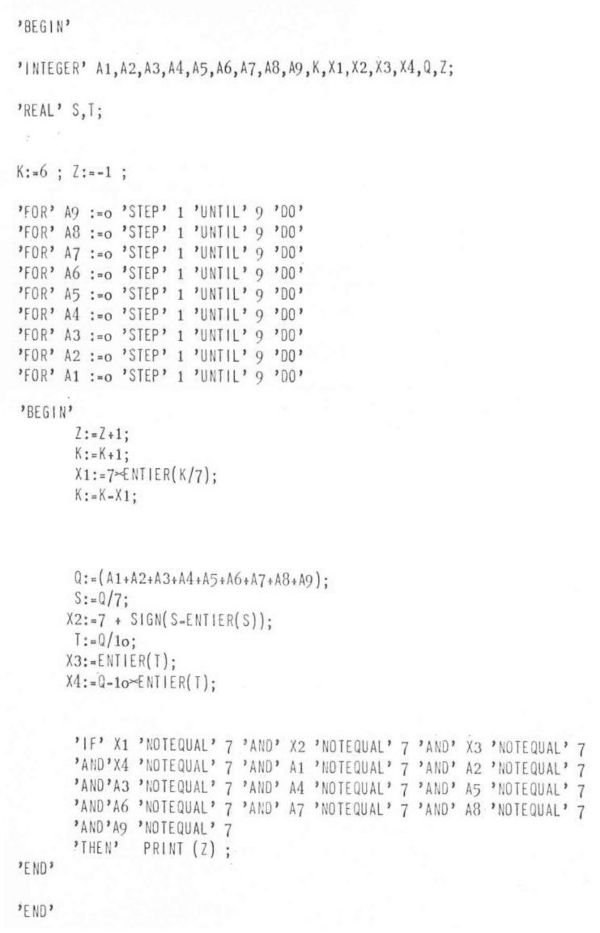 The usage of multiple for-loops to check each digit of the number with 7, instead of generating a string, is a limited but a creative solution. And the sum of all digits is directly accessable! The next interessting point: The maximal value for the sum of digits for example

– we dont need complex checks for this number. In the ALGOL example only

are used for these checks.

This works fine and I converted it to javascript (without changes), but it doesn’t perform like excepted. But this code can be an inspiration to get better performance boost for the solution of the forfeits game contest.

Simple test it in your browser:

The second solution printed in the book is from R. Wagner and the calculating/printing time was 7 minuts and 53 seconds.

I am working as a software developer and project manager in germany. I have a strong background with python and javascript coding and design/develop web services with all aspects starting with http headers, scaling and fail-over issues. I use my knowledge as project manager and team motivator in the successful german automotive branche.